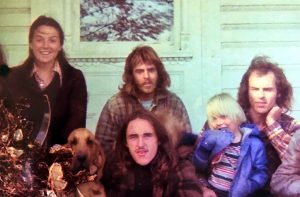 The Hobson and Lyall families were living in the small, rural town of Manotick watching the City of Ottawa move ever nearer and in the spirit of the times we were looking to move farther into the country to lead a simple life and live off the land.

Did we know anything about growing apples? No.

Did we have any money? No. (Thank goodness for patient if not always comprehending parents)

Were we prepared to buckle down, live the dream, and take on drowning debt? That depends on what you mean by “prepared”. Our lack of knowledge about apples and farming was fortunately matched by our youthful enthusiasm, in our early twenties, and a passion for learning.

We bought an historic farmhouse and learned the history of the place. The land on which Mountain Orchards is situated was first opened up to European settlement with the arrival of the United Empire Loyalists in the 1780s after the American Revolution. Originally occupied by Mohawk and later the Mississauga First Nations, it was ceded to the Crown through the Crawford Purchases of October 1783. This territory covered a large portion of what is now Eastern Ontario including the United Counties of Stormont, Dundas and Glengarry in which Mountain is located. Mountain itself was named in 1798 after Jacob Mountain, the Anglican Bishop of Quebec. John Middaugh built the original two-room post and beam in the late 1700s or early 1800s – bedroom upstairs, kitchen and living area downstairs. Middaugh farmed the land, did custom work for neighbours and sold general supplies.

Over a hundred years later, John Allen bought the property from the Middaugh family, expanded the farmhouse around 1925 and in 1932 planted the first apple trees on the property. The trees were grafted from the original McIntosh trees from Dundela, about 30 kilometres from here.

The Gibsons were Irish immigrants who owned the next farm west of the orchard. When their two sons, Bill and Norman, came home from serving in WWII, the boys purchased the Allen farm. It was the early Fifties. They did not have to look too far for love – they married the Milne sisters, Audrey and Dorothy, from the next farm east of the orchard. The house was divided into a duplex and the two families raised 11 children between them. The Gibsons expanded the orchard to 50 acres and built the first cold storage facilities – which we still use today. They initiated the first Pick Your Own apple operation in Eastern Ontario in 1970.

We, the Lyall and Hobson families, purchased it from the Gibsons in the spring of 1973 and are now onto our fifth decade. We have faced challenges, overcome obstacles and learned to adapt to the vagaries of farm life.

We kept building on those pave-the-way legacies, adding strawberries and raspberries which we grew for 25 years, and updating production practices in the orchard. 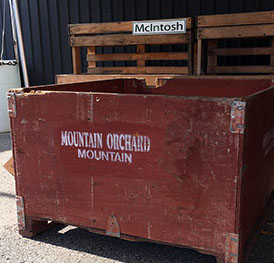 Gone are the days of large free-standing trees planted at 35 to the acre. The orchard now shelters dwarf trees requiring support posts, planted at 750 trees to the acre. We have over 10,000 trees in the ground.

We can protect the spring blossoms from frost with our 2 wind towers, the trees from drought with our drip irrigation and the fruit from hail by prayer.

Since those earliest days of the adventure, we’ve leaned into the future with hope, exuberance, blind luck, hard work, and a lot of invaluable guidance – from friends, mentors, our incredible staff, and the encouragement and support of the families who came back year after year, generation after generation to be a part of the Mountain Orchards story.

Growing apples is a wonderful way to live with the land. Growing a family tradition is the part we have loved the most. Not just for our families, but for yours too.